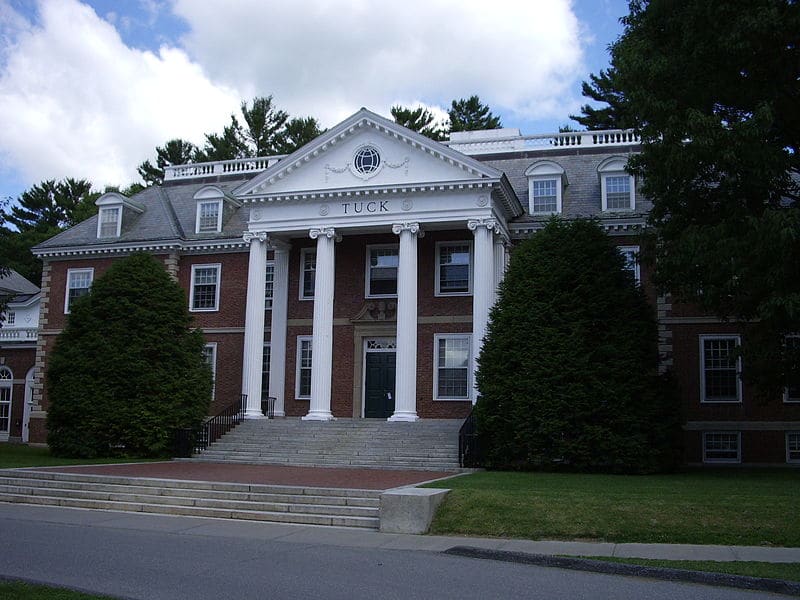 Dartmouth College is home to one of America’s top graduate business schools.

Many folks have asked us over the years — particularly international students and parents — what the difference is between a university and a college. We’ve heard parents say, “I want my daughter to attend a university. Not a college. Universities are more prestigious.” When we refer to highly selective college admissions, we’ve had folks from around the globe (incorrectly) correct us with something like, “No. My son already completed college. He wants to attend university.” Sometimes we don’t bother to correct them. Let the know-it-alls think they know it all. Namaste.

“It is, Sir, as I have said, a small College. And yet there are those who love it,” said Daniel Webster, an alumnus of Dartmouth College.

The fact is that the words “university” and “college” are somewhat — although not completely — interchangeable. There is no hard and fast rule that deems one institution a university while another university a college. Take Dartmouth College as an example. As the American statesman Daniel Webster once argued in one of the most influential Supreme Court cases in our nation’s history, Dartmouth College v. Woodward, “It is, Sir, as I have said, a small college. And yet there are those who love it!” Dartmouth is not Dartmouth University. It is Dartmouth College — and proudly so as Daniel Webster asserted. So while a piece by Mitchell Wellman on universities and colleges for “USA Today” points out that, as a general rule of thumb, universities connote institutions with graduate programs and separate undergraduate colleges (e.g., arts & sciences, engineering) while colleges connote institutions with mostly just undergraduate, all-in-one study, Wellman is also quick to — correctly — point out that it’s a rule that simply doesn’t hold true across the spectrum of American universities.

Dartmouth College has a medical school, an engineering school, a business school. It is a university in every sense of the word. But the College on the Hill proudly coins itself Dartmouth College. As Wellman writes, “Basically, not all schools of higher education that could call themselves a university choose to do so, even though ‘university’ tends to have more positive connotations. For some of these schools, they stick with the ‘college’ designation simply because of tradition, according to Grammarist.com. ‘In practical American usage, university has connotations of prestige that college doesn’t have, although there are some highly respected universities that call themselves colleges out of tradition (e.g., Dartmouth College),’ Grammarist says. ‘Still, no one talks about going to university in the U.S. After high school, you go to college, even if the college you’re attending calls itself a university.” Well said indeed, Sir, though not as well said as one Daniel Webster!