There’s an opinion piece out today on “CBS MoneyWatch” by Lynn O’Shaughnessy that focuses on why she thinks the “US News & World Report” university ranking is a joke. She argues in her piece on college rankings that “US News” isn’t concerned with measuring the quality of learning at the universities it ranks but rather it’s all just a “high-stakes beauty contest.” And what does Ms. O’Shaughnessy use to justify this statement? She states that 25% of the ranking is based on the university’s reputation. She’s not wrong. 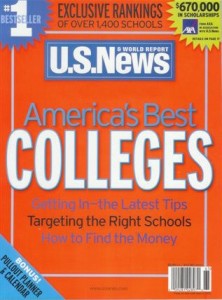 While university rankings may be flawed, they nonetheless carry significant weight.

But she claims that “reputation” puts universities like Ivy League colleges at an unfair advantage while lesser known universities start off in an unfair hole that’s impossible to catch up from. Again, she’s not wrong that the race isn’t even. But reputation matters, Ms. O’Shaughnessy! You write of Nova Southeastern University as if it really should be said in the same sentence as Harvard, Dartmouth, and Princeton.

This is a tough economy. Do you think a prospective employer is really going to think of a Nova Southeastern degree as on par with a Princeton degree? No. Reputation matters. It matters in the real world and so we happen to agree with “US News” that reputation should be a component of the algorithm to determine the university rankings.

Is the algorithm perfect? No, it’s certainly flawed. The algorithm is devised based on opinion and some of its component parts are also opinion-based. But rankings are important in American society and around the world. People place value on rankings. Call them a joke. Label them stupid. But at the end of the day, rankings don’t only sell magazines. Rankings sell universities and universities bend over backwards to get the best ranking they possibly can.

Check out this post on Malcolm Gladwell and university ranking or this one on guidance counselors and ranking universities.