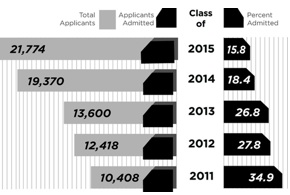 The University of Chicago has seen their admission rate fall drastically in recent years, according to this chart from the "Chicago Maroon."

At the University of Chicago, the admission rate is in fact 12 percentage points lower for the Class of 2015 as compared to the Class of 2012. That’s a major statistical difference and can largely be attributed to the University of Chicago’s increased recruitment efforts. But all highly competitive universities have ramped up their recruitment efforts in recent years. Check out our post on college admissions recruitment to learn about how colleges recruit students who they know don’t have a chance of ever getting accepted.

So why has the University of Chicago’s admission rate dropped so drastically? According to administrators, more students from the South and California are now aware of the university and the Chicago Studies program, and this has also led to increased applications. Do you think that this tells the full story? We don’t and we’re trying to get the answers as to why the University of Chicago’s admission rate has fallen so dramatically the last couple of years if all high competitive colleges have ramped up recruiting efforts. There must be something else they’re doing differently.