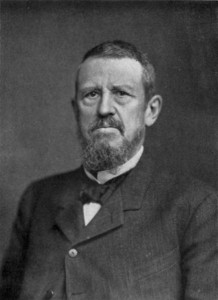 There is no need to major in business at the undergraduate level. And people are starting to take notice. By the way, if you’re wondering who this fellow is in the photo, it’s Joseph Wharton of The Wharton School of Business.

If you’re someone who wants to work in the business world after college, that doesn’t mean that you have to be one of the many undergraduate business majors. Just as med school applicants can major in philosophy (so long as they satisfy medical school course requirements), students who want to work in corporate America or as entrepreneurs do not in any way have to major in business. It’s completely not necessary and, in many cases, it can even hurt these students during their career.

According to an article on undergraduate business by Melissa Korn in “The Wall Street Journal,” “The proportion has held relatively steady for the past 30 years, but now faculty members, school administrators and corporate recruiters are questioning the value of a business degree at the undergraduate level. The biggest complaint: The undergraduate degrees focus too much on the nuts and bolts of finance and accounting and don’t develop enough critical thinking and problem-solving skills through long essays, in-class debates and other hallmarks of liberal-arts courses.”

The fact is that businesses value and seek out students with certain skills (i.e., the ability to program in Java, PHP, etc.) rather than seek out students who have certain degrees. Take a film major as an example. Do you think a film executive in the entertainment industry is going to hire an applicant because she majored in film? No. She’s going to hire her because she thinks she’ll do a great job, because she’s a strong writer, an avid reader, and eager to do grunt work. Sometimes a major in an area outside of what you end up working in can really be to your benefit. A major in computer science can often prove more valuable as students seek out employment in Silicon Valley than a business major. Even if they are seeking employment at a startup. The same is true on Wall Street. A psychology major can sometimes be more helpful than a major in business. The list goes on and on.

At Ivy Coach, we believe in the merits of a strong liberal arts education. If you’re at Wharton (the business school at the University of Pennsylvania), you’ll be studying undergraduate business. But, at most schools, don’t think that you need to major in business to get a leg up in the business world (as it’s often not a leg up at all!).