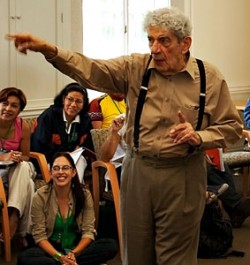 Dartmouth, and the world, mourns the passing of globally renowned Professor John Rassias, a man whose unique method changed how foreign languages are taught and how they are learned around our girdled earth.

Each selective university in the United States boasts professors whose mark on this world extends beyond the borders of their pristine campuses. Are there less selective universities at which this is the case? Maybe a few. But for the selective and most selective universities, it is the rule and not the exception. The University of Pennsylvania had the esteemed novelist Chaim Potok in its professorial ranks. Princeton University had renowned mathematician John Nash, the subject of “A Beautiful Mind.” Boston University boasts Nobel Peace Prize winner, acclaimed author of “Night,” and the world’s most famous living Holocaust survivor, Elie Wiesel. The University of Michigan, Penn, and Harvard University can claim to have had Senator Elizabeth Warren among their ranks. Acclaimed director Spike Lee and National Book Award-winning novelist James McBride teach at New York University. The list goes on.

For Dartmouth College, one such professor of theirs, for the last half century, has been John Rassias, who died yesterday at the age of 90. John Rassias pioneered arguably the world’s most famous approach to teaching foreign languages. As “Dartmouth Now” reports, “He will be remembered for his internationally renowned teaching method—which includes rapid-fire drills, immersion in culture, and a healthy dose of theater—a unique style that quickly makes students comfortable using a new language. Key to the method was his dramatic style, the goal of which was to eliminate students’ inhibitions and encourage dialogue from the first day of class.”

Dartmouth’s pioneering Professor John Rassias changed how foreign languages are taught and how they are learned. His influence lives on.

But the methods of John Rassias were not only taught at Dartmouth College for the Rassias Method was adopted by the Peace Corps — it’s how the Peace Corps trains its volunteers in languages. As “Dartmouth Now” reports, “Dartmouth was not the only recipient of Rassias’ enthusiasm for language. He shared his method with the People’s Republic of China, Bulgaria, France, Japan, Greece, Turkey, the city of Baltimore school system, the Federal Law Enforcement Training Program, and the New York City Transit Police, among others.”

John Rassias forever changed how foreign languages are taught and how they are learned. And his influence on bridging divide between peoples, on working toward a mutual understanding between different cultures, his Rassias Method, his spirit — it all lives on.