The Attempt to Dismantle Affirmative Action 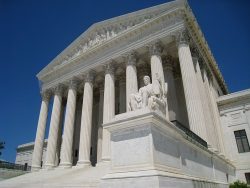 The new Supreme Court nominee could control the fate of Affirmative Action.

As President Trump prepares to nominate a new judge to the highest court in the land tomorrow to fill the seat of the iconic Justice Kennedy, supporters of the practice of Affirmative Action are, in many ways, scared. They’re scared the addition of another far-right judge to the Supreme Court will lead to the dismantling of a practice that has helped underrepresented minorities — among them African American, Latino, and Native American young people — for many years achieve a path toward the American Dream. They’re scared the court will follow the new guidance against the use of race in admissions decision-making of the United States Justice Department under the stewardship of Attorney General Sessions. And these folks should be scared because the continued practice of Affirmative Action — a not perfect practice but one we believe is necessary to create a more perfect union — is in peril.

Affirmative Action Isn’t Perfect, But It’s the Best System We Have To Create a More Perfect Union

We’ve written many times over the years on the pages of our college admissions blog why Affirmative Action isn’t perfect but it is the best system we have here in America to foster upward mobility, to champion equality for all, to facilitate the pursuit of happiness for so many of our nation’s citizens. We won’t do that again today. We’ve made our case. Do Asian Americans face unjust discrimination in highly selective college admissions? Absolutely. But the practice of Affirmative Action is not to blame. Why not take aim at legacy admission? Or the admission of development cases, the children of donors? The list goes on. To single out Affirmative Action as the basis for Asian American discrimination in admission is out of touch with reality.

But these are arguments we’ve made — and they’re arguments we’ll continue to make. Today, we’d like to share with our readers a video. It’s a video that really says it all about our support for the practice of Affirmative Action. It’s a video we hope the new appointee to our nation’s highest court will have the chance to see.