Taking Admissions Slots Away from Other Applicants 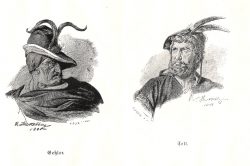 These men seemed to enjoy feathers in their caps, too.

A few years ago, we had a student who didn’t earn admission in the Early Action round at Harvard. The student was deferred. But Ivy Coach, you had a student who was deferred? How could it be? Every now and then it happens — but it always works out in the end. You see, this student ended up earning admission to Harvard in the Regular Decision round after we helped the student submit a powerful Letter of Enthusiasm. The student also earned admission to each of the seven other Ivy League schools, Stanford, Duke, and a host of other highly selective universities. So the student we were most worried about that year — because it was our one student who didn’t earn admission to their dream school in the Early round — ended up with better news just a few months later. And we ultimately had to convince the student to choose to matriculate to Harvard over Stanford because dreams, well, they can change after a deferral.

There is a piece in today’s “New York Times” by Matt Stevens entitled “20 Full Rides to Top Colleges: A Texas Student’s Perfect Sweep” that highlights the story of a student, Micheal Brown, who earned admission to 20 highly selective colleges. Way to go, Micheal! From the profiles we’ve read of Micheal in the press, he sounds like a truly impressive young man. But what these profiles fail to mention is that Micheal did something we would never allow our students to do — he took slots away from other students likely only so as to accrue more feathers for his cap.

You see, Micheal earned admission in the Early round to Stanford University. And students who are admitted to Stanford generally don’t end up attending Cornell, Northwestern, Georgetown, Pomona, Michigan, and other elite institutions that, well, just aren’t Stanford. And Micheal has been open about the fact that Stanford was his first choice. As Matt Stevens reports, “[Micheal’s mom] said she was pulling for her son to attend Stanford because it has been his top choice for so long or Harvard because she thinks it would be an even better fit.” So why oh why did Micheal feel the need to apply to the likes of these schools in the Regular Decision round when clearly he had no intention of matriculating? By doing so, Micheal only took slots away from other deserving candidates. That should not be applauded by the press. It should be condemned. Hey, we’ve never been told that we don’t tell it like it is.

Sorry Pomona. We absolutely appreciate that a student admitted in the Early Action round to Stanford may wish to apply to Harvard in the Regular Decision round. And we are not against a student submitting applications to 20 colleges — not in the least — unless they earn admission to a school like Harvard, Yale, Stanford, or Princeton in the Early Action round if they didn’t apply through a binding Early Decision program. A couple of years ago, we had a student admitted Early Action to Stanford who also wished to apply to UPenn. We questioned if the student would really attend UPenn if admitted but because the student was applying to Wharton, we said we understood. But we told this student we did not understand this student’s stated intent to apply to several other highly selective colleges. We told this student that submitting applications to these schools would only take slots away from other students and add feathers to his already super nice cap. The student ultimately listened to us and applied only to Harvard and UPenn (Wharton) in the Regular Decision round. The student ultimately attended…Stanford.

So congratulations to Micheal Brown on your admissions to Stanford and Harvard. But we will not congratulate you on any of your other admissions — because you should not have submitted applications to these schools. We will not now, not ever congratulate a student because they chose to add feathers to their cap at the expense of other students.