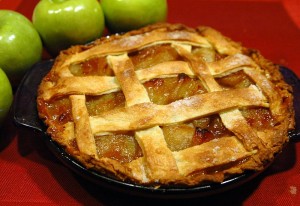 Students on waiting lists should not send pie to admissions offices. We like pie. But don’t send us pie either. That’s weird (photo credit: Dan Parsons).

There’s an article up on “Quartz” that students on waiting lists might find interesting. In the piece by Sonali Kohli entitled “The craziest ways applicants have won over admissions officers at elite American universities,” Kohli writes about some untraditional approaches students on waiting lists have taken over the years. As a word of caution, while indeed a music video has worked in the past, we ordinarily do not encourage students to submit music videos. And that’s because most students just aren’t very musically talented, in spite of what mommy and daddy might think. And just because one can play the violin doesn’t make watching a video of you playing the violin while discussing how much you want to get off the waitlist compelling. Our approach at Ivy Coach has always been helping students submit compelling Letters of Enthusiasm. It’s an approach that has a strong track record of working.

The piece in “Quartz” features quotes from Parke Muth, a longtime admissions officer at the University of Virginia. As the piece so describes, “Pestering with discretion is a lot more persuasive than the nagging desperation shown by some applicants and their parents, says Muth. Some parents have called him pretending to be their children, while one mother came to the UVA admissions department, followed Muth into his office, and got on her knees, begging for her son’s admission. Says Muth: ‘Schools want demonstrated interest but they don’t want unending pleas.'” They sure don’t!

Don’t pitch a tent outside of the admissions office. Don’t fry bacon in the morning. Yes, that is a shout out to a video that Richard Moll, the former dean of admissions at Bowdoin and Vassar as well as a former admissions officer at Harvard and Yale, made over two decades ago. Back in the days of VHS. We remember that video, Richard Moll! Don’t go crazy. Don’t submit the pajamas you wore as a toddler. Don’t submit family heirlooms. Don’t send them pies. Although, as a regular reader of our college admissions blog, you know that we have a lot to say about pie. Just submit one heck of a compelling Letter of Enthusiasm. And for those of you who think you know what a compelling Letter of Enthusiasm is, you likely don’t. Unless of course you’re a client of ours. In that case, you sure do! For everyone else, it is in all likelihood the precise opposite of what you think. It usually is.