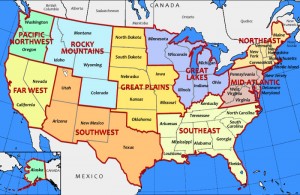 Here's a breakdown of where out-of-staters tend to hail from at the universities in your state.

There was an interesting chart recently in “The Chronicle of Higher Education” on states and college admission. The chart delineates the percentage of students who hail from each state at each state in the union. While we can’t imagine you’ve always wondered what percentage of students attending college in the state that’s “First in Flight,” hail from Ohio, you can now rest easy with this data. We hope you enjoy!

In Pennsylvania, the biggest number of out-of-staters hail from New Jersey with 9,213 (all of this data was collected for the 2008 academic year). New York residents come in second to New Jersey for students attending universities like Penn, Drexel, and Penn State. In Massachusetts,  the biggest number of out-of-staters hail from The Empire State with 4,284 students attending universities like Boston University, Harvard, MIT, and Emerson.

In Colorado, the biggest number of out-of-staters hail from California. Those surf bums love their snowboarding. Out-of-staters in Arizona tend to come from California, too. And what about New Hampshire? Many come from Massachusetts. Shocker. Or what about Alaska? There, the data doesn’t really seem statistically significant with only 242 students in the sampling population!

What do you think about this data on states and college admissions? Has it changed your world? Let us know your thoughts by posting below! And check out this post on University of California Admissions for out-of-staters.