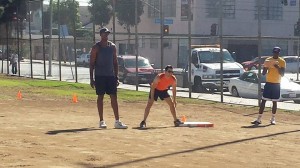 We salute Jason Collins of the NBA for coming out as gay. Here, he is seen playing kickball with Bev’s son (in orange). And Jason is wearing a Stanford hat.

For many years, the LGBT community has waited for their Jackie Robinson. They’ve waited for the first male athlete to be openly gay while competing in one of the four major U.S. pro team sports leagues – the NFL, NBA, MLB, or NHL. The website Outsports.com was founded in 1999 by our friends Cyd Ziegler and Jim Buzinski to tell the stories of closeted and openly gay athletes in other sports, to help make this world a better, more inclusive place for all. On so many occasions, the LGBT community thought that alas one such male athlete from one of the big leagues would come out as gay only for their hope to be dashed when rumors proved unfounded. Today, the 29th of April in the thirteenth year of this 21st century, this has all changed. Jason Collins, a veteran NBA big man, who starred at Stanford University with his twin brother, has come out as gay.

And Jason Collins didn’t just come out as gay. In his extremely thoughtful piece in “Sports Illustrated,” he came out as a champion of gay rights, as someone who has taken on the charge of making pro sports more inclusive and less homophobic. And the man was wearing #98 the last couple of seasons — a number of significance to the gay community because it was the year Matthew Shepard was killed and the year The Trevor Project was founded. What a powerful statement Jason Collins was — then quietly — making.

Jason Collins is a hero, one the gay community has been waiting to embrace. HIs writing is eloquent, his cause noble, his struggles genuine and gripping. It should come as no surprise that Jason Collins attended Stanford University, one of the finest universities in the land. It should come as no surprise that Jason Collins has every intention of continuing to compete in the NBA next year, marking his 13th NBA season (which has included 9 playoff appearances and 2 NBA Finals appearances). The NBA journeyman averaged about a point and a rebound last year. He’s no star. He’s a team player who sets hard picks and plays great defense. In some ways, he is risking his career to make this statement.