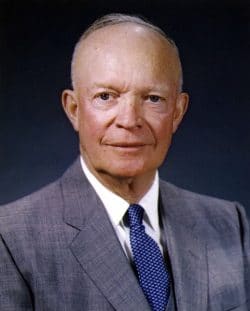 We suspect, based on our readings, that President Dwight D. Eisenhower didn’t feel he was a good fit at Columbia. But that’s just our two cents.

We know you woke up wondering this morning, “Which Presidents of the United States also led universities during their lifetimes?” Because who doesn’t wake up thinking about such things. We know we do! And apparently someone at “US News & World Report” does too since they published a piece on U.S. Presidents who also led universities. Ok, we sound ridiculous right now. But that’s ok! We’ll own it. Because no longer will you have to wonder if George Washington ever led a university. Your curiosity will be satisfied. And, yes, George Washington sure did lead a university. He served as the Chancellor of the College of William and Mary in Virginia.

Washington’s pal Thomas Jefferson also led a university, serving as the Rector of his pride and joy, the University of Virginia. And guess who also served at one point as Rector of UVA? None other than James Madison! Oh and back to William and Mary. George Washington wasn’t the only President of the United States to also serve as Chancellor at the College of William and Mary. John Tyler did too! Pretty cool, right?

William and Mary and the University of Virginia boast affiliations with more than one President of the United States. Pretty cool, right?