The always entertaining Penn Dean of Admissions, Eric Furda, recently appeared on NBC’s sinking morning news show to discuss the college admissions process (hey, we’re “Good Morning America” fans here and of Robin Roberts in particular). If you haven’t previously heard, “GMA” has been beating “Today” significantly in the ratings of late — a mighty changing of the guard from the years and years of “Today Show” dominance. Anyhow, so what did Dean Furda have to say (see it here through “The New York Times'” “The Choice” blog on college admissions). 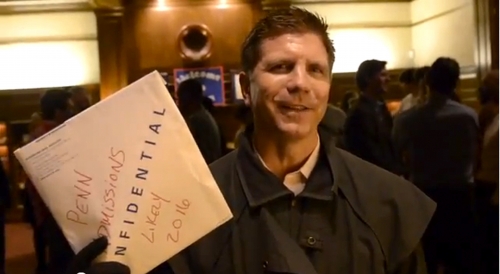 Dean Furda of the University of Pennsylvania discusses the college admissions process on NBC’s “The Today Show” (photo from YouTube / “The Daily Pennsylvanian”).

Dean Furda agreed with Al Roker that selecting a college is very much like selecting a house. You might like it from the outside or you might think it’s right for you based on the plans but that all might change once you step foot inside. Dean Furda also said, as we’ve been saying for years, that students should observe students after they come out of classes. Hear what they’re saying, see what they’re wearing, see if you want to surround yourself with these students for the next four years. The tour and information session both have great info on a school but there is nothing that replaces seeing what the actual students are all about.

Dean Furda is also asked if an ‘A’ in a Regular course is better or worse than a ‘B’ in an AP course. We’ve always said that an ‘A’ in an AP class is better! Students should take the most challenging curriculum possible and excel in that curriculum! Mr. Furda also states that the average number of applications submitted by the The Common Application is four. He also states that, realistically, students can apply to eight schools and really cover themselves. Al Roker closed the piece by stating that he hopes Dean Furda is still around at Penn when his ten year-old son applies in a few years. A funny guy. Did you happen to see America’s most ubiquitous weatherman at the Inauguration? He was outright hilarious screaming to get President Obama and Vice President Biden’s attention.