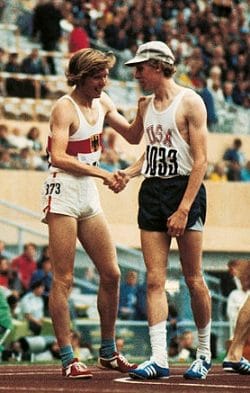 Ivy Coach salutes Dave Wottle, an admissions dean who happens to be one of the most memorable Olympic champions of all time.

As we reflect back nostalgically on the dominating performances of folks like Simone Manuel, Katie Ledecky, Simone Biles, and Michael Phelps at the Rio Olympic Games, we thought we’d share with our readers a video from the 1972 Olympic Games in Munich. In track and field, the 800 meter final would go down as one of the great races in the history of sport when an American wearing a cap (who wears a cap when trying to set world records?) came from behind to win Olympic gold. And he didn’t just come from behind. He came from dead last (and a far dead last) to win by three one-hundredths of a second — passing every single runner in the field in the final 300 meter stretch, including the favorite Yevgeny Arzhanov of the Soviet Union.

And who was that runner in the cap? It was Dave Wottle, who would go on to work for many years in the field of college admissions. Wottle served as Dean of Admissions and Financial Aid for 28 years at Rhodes College before becoming Interim Vice President for Enrollment Management at Millsaps College. He’s now Interim Vice President for Enrollment at Ohio Wesleyan University.