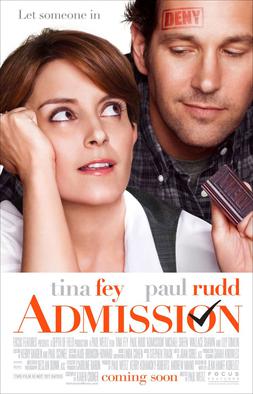 Was “Admission” 100% accurate? Absolutely not! It was a dramatization, not a documentary. We happened to think it was quite good!

There was an article published in “The Atlantic” by Eleanor Barkhorn that is a bit critical — in an interesting way — of the movie on college admissions (“Admission”) starring Tina Fey and Paul Rudd. In her editorial, Ms. Barkhorn writes about how “stuffy” universities like Princeton University, which is the university at which Fey’s character works in the college admissions movie, have been going after “free spirits” these days to distance itself from its “preppy” roots. She thinks that the movie would have been better had it focused on highly selective colleges targeting these types of students rather than focus on motherly guilt. We’re not so certain Ms. Barkhorn’s idea for what makes a good movie is fully baked, but she does raise some interesting points in her piece about schools like Princeton going after “green-haired” students.

Writes Ms. Barkhorn, “When Shirley Tilghman became Princeton University’s first female president back in 2001, she announced that she wanted to see some changes to the place F. Scott Fitzgerald once called ‘the pleasantest country club in America.’ ‘I would like to think we could begin to attract students with green hair,’ she said in an interview that summer. ‘We will take pink and blue and orange hair, too.’ The hypothetical green-haired students were a rhetorical device, of course, a symbol of the more diverse student body that Tilghman hoped to see. To help realize that vision, the university eliminated student loans in 2001 and replaced them with grants so students, no matter what their family background, could graduate without crushing debt.” Ms. Barkhorn goes on to write how as president, Shirley Tilghman even judged an all-Ivy drag contest. That is pretty cool for an Ivy League president to do!

Anyhow, Princeton and many highly selective universities — both within and outside the Ivy League — have indeed made great strides to increase their diversity over the last several years. Schools like Princeton have tried very hard to distance their future from a past of “preppiness.” University administrators like Shirley Tilghman don’t want the top colleges to be old boys networks anymore. They want them to be bastions of great intellectual thought and diversity of opinion, which only comes out of a diverse student body and diverse professorial ranks. Does all of this make for a great movie plot-line, though? Not so much. We think “Admission” was pretty good as is. Completely accurate? Absolutely not. Not even close. But it’s a dramatization, not a documentary.