Letters of Recommendation for College 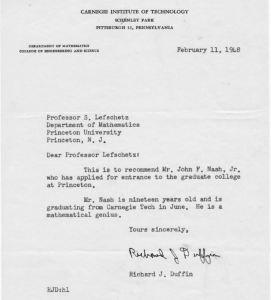 Sometimes, a simple letter of recommendation can say a whole lot.

You’ll note that the entire letter of recommendation goes like this: “This is to recommend Mr. John F. Nash, Jr. who has applied for entrance to the graduate college at Princeton. Mr. Nash is nineteen years old and is graduating from Carnegie Tech in June. He is a mathematical genius.” And that was it. But when a distinguished physicist from one of the world’s foremost institutions (Carnegie Tech would become part of Carnegie Mellon) writes that someone is a mathematical genius, people take note.

In most cases, recommenders will have to show this genius through more stories to make for a great letter of recommendation for admission but in this instance, the simplicity of the statement worked extremely effectively. And, of course, Princeton made the right decision. They admitted John Nash and he would in time become one of — if not the — most distinguished members of the university’s faculty. Nash’s was a life filled with accomplishment, with overcoming adversity, and it’s a life Princeton, and the world, will sorely miss.