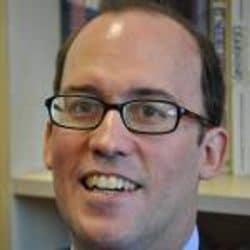 Richard D. Kahlenberg, a senior fellow for The Century Foundation, is in our view the sharpest critic of legacy admission in America. We’re big fans.

Richard D. Kahlenberg, whom we’ve praised many times over the years on the pages of our college admissions blog for his astute attacks on legacy admission, wrote this in a piece for “NBC News” yesterday entitled “Higher Education’s Biggest Scam Is Legacy Admissions Policies,” “Elite colleges claim legacy preferences only come into play for close calls, by providing a feather on the scale. But research from Princeton University’s Thomas Espenshade shows that legacy status provides a boost equal to scoring 160 points higher on the SAT (on a scale of 400-1600).”

Kahlenberg goes on, “Similarly, former Princeton University President William Bowen and colleagues wrote that, within a given SAT-score range, being a legacy increased chances of admission to a selective institution by 20 percentage points. In 2011, Harvard University researcher Michael Hurwitz found that legacy preferences mattered even more. Looking at fall 2007 applicants to 30 elite schools, his analysis, concluded that legacy preferences of all kinds increased chances of admissions by 23 percentage points. More important, ‘primary legacy’ candidates (sons and daughters, as opposed to siblings, nephews, nieces or grandchildren) saw a whopping 45 percentage point increase in the chances of admission.”

So for those folks who suggest that legacy status in highly selective college admissions can’t make or break one’s candidacy, well, the facts don’t support their argument. Legacy status can in fact make all the difference as the aforementioned data so suggests.

But Kahlenberg left out our favorite of his arguments against the practice of legacy admission from his piece for “NBC News” and that is that legacy admission is a violation of law — of tax law that is. As Kahlenberg writes in the piece, “I believe that President Donald Trump may be wrong about many things, but he is right that aspects of the American system are rigged against working-class people. It’s harder to find a purer example of that than providing an advantage in college admissions to students who are already advantaged.” Amen.

To expand further with an argument Kahlenberg has championed for years (and one we’ve echoed), legacy admission violates tax law. You see, many alumni donate money to their alma maters. But they’re not supposed to receive anything in return for their donations. After all, these donations are tax-deductible. In our view, alumni donating money to an institution, and writing these donations off, only to receive preferential treatment in admissions for their children violates 26 U.S. Code § 170.

26 U.S. Code § 170 reads as follows: “There shall be allowed as a deduction any charitable contribution (as defined in subsection (c)) payment of which is made within the taxable year. A charitable contribution shall be allowable as a deduction only if verified under regulations prescribed by the Secretary.” The code is a bit dry being as it’s tax code and all and we’re no accountants or tax attorneys to be clear but one part of this code also states, “(C) no part of the net earnings of which inures to the benefit of any private shareholder or individual.” It sure seems like the net earnings of this donation ‘inures’ to the benefit of the donor. Bye Felicia is right.