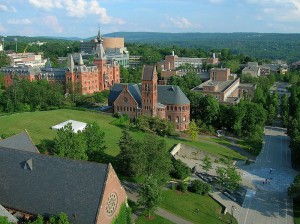 If a mother attended the undergraduate university you’re applying to, you’re a legacy. If only an uncle did, you’re no legacy (photo credit: sach1tb).

Ivy League legacy admission makes many folks cringe. Some consider it anti-American. After all, American universities should in theory be open to those most deserving of admission and, often times, accepted legacy candidates are weaker candidates than non-legacies who get denied admission. It seems to be contrary to the American Dream, a dream in which folks from humble beginnings are supposed to be able to rise to become masters of the universe. And some consider it downright illegal — a violation of tax law since alumni are getting something valuable back in exchange for their tax-deductable donations to their alma mater.

But what advantage do legacy candidates actually have at Ivy League schools? To answer this, let’s start by debunking some myths. Here’s a big myth: Your grandmother, grandfather, cousin, uncle, aunt, sister, brother, friend’s brother’s sister-in-law once removed can’t make you a legacy candidate! The only way in which you’re considered a legacy in the Ivy League admissions process is if one of your parents (or both) attended the Ivy League school to which you’re applying. That’s it. Nobody else. Will a triplet get extra consideration if the school admitted the other two members of the trio? Yes. But this is the exception to the rule, not the rule.

And just what kind of odds do legacy candidates have as compared to non-legacy applicants to Ivy League colleges? Ivy League colleges, unsurprisingly, are reluctant to share this data but it has indeed leaked out over the years. Kids of legacy parents’ applications are tagged and comprise about 10-15% of incoming classes each year at the eight Ivies. Some sources have claimed that Harvard admits 40% of applicants, Princeton 35%, and Penn 41%. Dartmouth reports that it admits legacies at a rate twice to two and a half times as high as non-legacy applicants. While the data changes every year, you get the idea.

But do you think all legacy candidates are created equal? Check back on our blog soon to find out the answer! And let us know your thoughts on Ivy League legacy admission by commenting below.