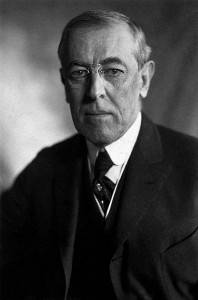 President Woodrow Wilson, a former member of The Ivy Club (an exclusive eating club at Princeton) became a noted adversary.

Ivy League schools are known for exclusivity. And even after students gain admission to Ivy League colleges, many students still hope to get into exclusive eating clubs or secret societies. Just ask Mark Zuckerberg. In this post, we’re going to focus on a Princeton University eating club that was founded in 1879 – The Ivy Club.

The Ivy Club is considered to be one of the “Big Three” eating clubs at Princeton and it gained some fame by being featured as an aristocratic society in F. Scott Fitzgerald’s novel “This Side of Paradise.” Students are selected to be members of The Ivy Club through what is known as the bicker process. During students’ sophomore spring, students are welcome to attend eating clubs that they wish to get into and then the students who are already members of the eating clubs debate for a few evenings who they should tap for admission. The process varies at each eating club at Princeton.

Alumnus and former United States President Woodrow Wilson, who had been a member of The Ivy Club, became a noted adversary of these institutions during his tenure as president of Princeton. He felt they distracted from an undergraduate education at the Ivy League college and that their exclusivity was not healthy to the university. Over the years, members of The Ivy Club have included Secretary of State James Baker, “Moneyball” author Michael Lewis, Hobey Baker of hockey fame, and the chairman and CEO of Ford Motor Company Bill Ford.

Check out our post Ivy League Connections and have a look at Ivy League Admissions Stats.