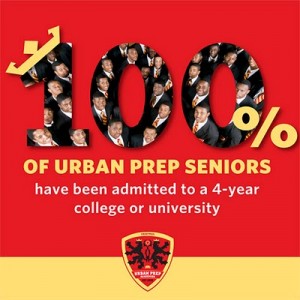 Urban Prep Academy just announced that two of its graduates are Ivy League admits. And for the second year in a row, 100% of its grads will be attending college. But are these numbers telling the whole story?

Urban Prep Academy in Chicago, a charter school that has received quite a bit of media attention the last couple of years (including features on CNN and “World News with Diane Sawyer,”) made an announcement recently that two of its graduates are Ivy League admits for the Class of 2015. The charter school, an all-male, all-black academy that last year sent all of its graduates to college has made headlines again with this Ivy League news.

The Ivy League admits, Matthew Williams and Julius Claybron, were both admitted to Cornell University. Williams was also accepted at Dartmouth College and waitlisted at Harvard University and Yale University. Said the school’s founder and CEO Tim King, “It’s a special kind of badge of honor when a student is admitted to an Ivy League school. It speaks to what is possible even in one of the toughest neighborhoods in the city of Chicago, in a Chicago public school and with students coming in performing below grade level. If you can create a school with the right kind of culture and give students the support they need, then students can do well and achieve.”

The school is not without controversy, however, as some people point out that while the school has sent 100% of its graduates to college, many students drop out and so don’t count towards this statistic. Some even wonder if the school encourages these students to drop out so as not to hurt statistics that captivate the media. What do you think? Let us know by commenting below!