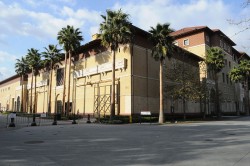 It is our humble opinion that film schools are totally overrated (photo credit: Joe Mabel).

In short, we think film schools are quite silly. In fact, we think going to school for any trade is quite silly (unless of course it’s something like engineering). The very best colleges in America offer liberal arts educations. Do some of these schools offer film majors? Yes. But while studying film at an Ivy League school might be fun, you might be able to get a better education in film at USC. Or NYU. Your degree from an Ivy League school, of course, will be more valuable in the long-run, but you might well learn more about cinéma vérité as a Trojan. We’re not quite sure what cinéma vérité is, but we figured we’d drop the phrase, like a snobby film student. Chuckle, chuckle.

Another key reason why we don’t advocate that students attend film school is because you don’t need to major in film to become a great filmmaker, a great television executive, or producer. Hollywood is an industry that is a bit backwards in that, in many ways, it doesn’t adapt to changing times. People often still work their way up in Hollywood by starting off as assistants. A master’s degree from Stark at USC might sound impressive on paper but, in actuality, an employer may resent the notion that someone thinks they can bypass the assistant route because they have a degree from a producing program at USC (no offense, USC). Television and film are also trades that can best be learned by doing — by working in the industry. So that fancy degree from USC or NYU may not be so worthwhile after all. It’s why we encourage aspiring directors, writers, and producers to attend the best college out there, not the best film school out there.