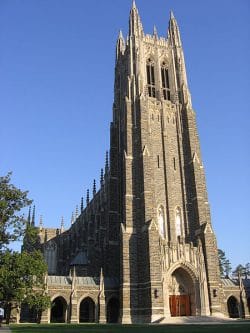 It was a banner admissions cycle at Duke this year.

Regular Decision notifications have been released to applicants by Duke University for the Class of 2022 and the admissions figures are out for public consumption. More than 37,300 students submitted applications to Duke University this year in the hope of earning a slot in the Duke Class of 2022, nearly 33,300 of whom applied during the Regular Decision cycle (as our regular readers may remember, 4,090 students applied to Duke in the Early Decision round). This overall applicant figure marks a record for the university. And while Coach K’s recruiting class — tops in the nation and maybe even the best recruiting class since Michigan’s Fab 5 if you ask us — has received much attention, we figured we’d focus on the overall pool of applicants to the Durham, North Carolina-based institution rather than just the pool of basketball recruits. We’re silly like that. But what a basketball recruiting class!

Anyhow, among the nearly 33,300 Regular Decision applicants to Duke this year, 2,123 students received offers of admission — joining the 875 students previously admitted from Early Decision. This marked a Regular Decision admit rate for Duke of 6.4%. An additional 99 students who were deferred in the Early Decision round also learned they got in when Regular Decision notifications were released…it just took a few extra months. Hey, they say the best things in life take time. It sure is true.

Congratulations to all students who earned admission to Duke University to be members of the Duke Class of 2022. Go Blue Devils!