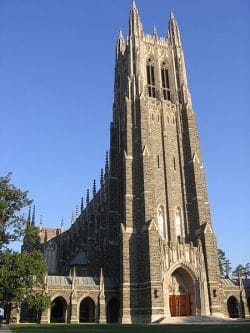 Duke leads Mercer by only one point at the half in the Round of 64. Should they lose, we predict that this will adversely impact Duke’s admissions statistics next year.

Update: In one of the great college basketball games of the twenty-first century, Mercer upstaged basketball royalty in Duke University in the Round of 64. Mercer’s upset embodies all that the NCAA Tournament is about. Today is a dark day for Christoph Guttentag, Duke’s Dean of Admissions. Had Duke advanced to, say, the Final Four, we would predict that applications would soar next year. But now they won’t. Hey, at least Duke has a decent football team now, right?

Originally Published: As you know from reading our college admissions blog, March Madness can have a direct impact on a university’s admissions statistics. Essentially, the further a university advances in the NCAA Tournament, the more applications they will receive, the lower their admission rate will be, and the higher they’ll rank in the all-important “US News & World Report” annual ranking. So, yes, admissions officers are every bit as glued to March Madness as any passionate college basketball fan.

Of the universities in the NCAA Tournament this year, we would classify these universities as highly selective in terms of admissions: UCLA, Stanford, UVA, Harvard, UNC, Duke, and Michigan. UCLA hasn’t yet played in the Round of 64 nor have Stanford, UVA, or UNC. Harvard, as you know, pulled off one of the best upsets yet with their impressive win over Cincinnati. Harvard was a trendy upset pick and Tommy Amaker’s crew delivered in spades. Michigan also pulled off a 57-40 win, while Duke is currently fighting for its life against — of all schools — Mercer. Duke holds only a one-point lead at the half (35-34).

If Duke loses to Mercer, this will adversely impact the number of applications received next year for the university in Durham, North Carolina. Only time will tell if the mighty underdog that could, #14 Mercer, can upstage one of the most storied basketball powerhouses in the history of college basketball. You can bet that Duke’s Dean of Admissions Christoph Guttentag is currently glued to the television. And as for Harvard, they face Michigan State on Saturday. President Obama did predict that Harvard would win their opening round game, but he also predicted that Michigan State would win the NCAA Championship. Will he be right again? We shall see!