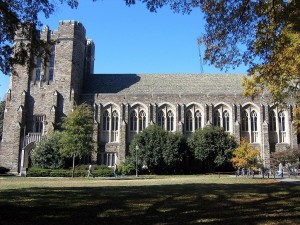 This year, the Duke admissions yield is the highest in 35 years.

The Duke yield statistic for 2014 is the highest it has been since 1979. With 47.7% of students admitted to Duke University choosing to matriculate, this marks an increase in the yield rate of over 2% from the same time last year. And the yield rate is up 5% from just two years ago. That’s a significant bump. As we’ve written about on our blog for years, the number of applicants to Duke University is often invariably — and however unfairly as Duke is a renowned academic institution — tied to how far the Duke men’s basketball team advances in March Madness. But yield doesn’t necessarily follow suit as well. As you may recall, Mercer beat Duke in this year’s March Madness, marking one of the biggest upsets in sports in 2014. But the yield rate for 2014 is the highest in 35 years.

According to an article on the Duke admissions yield in “The Duke Chronicle,” “The uptick is due to more students admitted via early decision—a record 47 percent of the class—as well as a slight increase in regular decision yield, [Dean of Undergraduate Admissions Christoph] Guttentag said. The incoming freshmen are also responsible for another milestone—more than half of them are students of color, a first for Duke. ‘It goes without saying that we’re pleased,’ Guttentag said. ‘I think it’s a reflection of how the institution presents itself to prospective students and their families, I think it’s a reflection of the quality of the education, I think it’s a reflection of the commitment to diversity.’ The class includes record numbers of Asian students, Latino/a students and international students—with 495, 159 and 183 students, respectively. There are also 75 students admitted from a waitlist of more than 1,000. The University aims to admit a few students from the waitlist each year, Guttentag noted. There was a slight shift in the class’s geographic make-up. North Carolina, California, New York and Florida retained their spots as the four most popular states, and Texas took fifth place for the first time, replacing New Jersey.”

But how does Duke’s yield rate stack up against the eight Ivy League institutions? Not so well. The Ivies all regularly have yield rates of 50% or higher. This is also true at other highly selective colleges not in the Ivy League such as Stanford and the University of Chicago. Why do you think that is? Let us know your thoughts on the Duke admissions yield by posting a Comment below. We look forward to hearing from you.

And, while you’re here, read about March Madness and College Admissions.