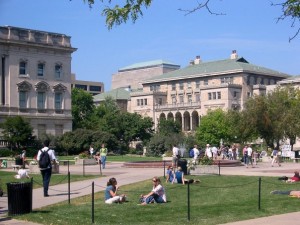 The University of Wisconsin Photoshopped an African American student into a photo. Not this photo (photo credit: Vonbloompasha).

High school seniors are bombarded with college brochures. But do those college brochures accurately represent the colleges they’re portraying? Not always. Of course not always. These brochures are advertisements. The University of Wisconsin got a lot of flack a while back when they Photoshopped an African American student’s face into a photo to demonstrate to prospective students how Wisconsin is a welcoming place to all. But was that such a bad thing to do? Weren’t they just trying to show that they value diversity?

According to a piece on diversity on college campuses in “NPR,” “This Photoshopped image went viral and became a classic example of how colleges miss the mark on diversity. Wisconsin stressed that it was just one person’s bad choice, but Shabazz sees it as part of a bigger problem. ‘The admissions department that we’ve been talking about, I believe, was on the fourth floor, and multicultural student center was on the second floor of that same building,’ he says. ‘So you didn’t need to create false diversity in the picture — all you really needed to do was go downstairs.'”

Is it not right for colleges to have photos that portray the campus as 25% African American when in fact the student body is only 12% African American? Do you think this kind of misrepresentation needs to cease in college brochures? Let us know your thoughts on the subject by posting a Comment below. We look forward to hearing from you.