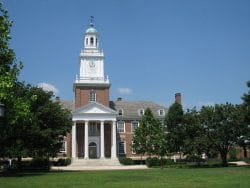 Ivy Coach salutes Johns Hopkins University for its longstanding covered grades policy. If nothing else, it was pretty original.

Ivy Coach salutes Johns Hopkins University for having a really cool covered grades policy in place since 1971. In spite of criticism, Johns Hopkins dared to do things differently from so many of America’s top colleges.

So Johns Hopkins had this policy where students at the beginning of their college experience, during their first semester, got to take courses for covered grades. It was to help their transition from high school to college. But many professors believe the policy delays “the development of study skills” and such. And for students who do really well during the first semester of freshman year, their grades don’t reflect their hard work and talents — so there’s a lack of motivation.

We at Ivy Coach understand the pluses and minuses of covered grades. We’re not sure where we stand on the issue. But we do applaud the university for daring to have covered grades for so many years. What should also be mentioned is that it encourages students to take courses they wouldn’t otherwise take out of fear they’ll get bad grades. If a student wants to take an economics course to learn about economics (which is really important!), he or she should be able to do so without it negatively impacting the student’s grades. The student should be able to take the economics course strictly for learning’s sake! After all, isn’t that what a liberal arts education is all about? That question was rhetorical. Yes, yes, yes! So apparently we do totally support this covered grades policy and we’re disappointed it’s ending. So we do have an opinion. It sometimes just takes a little bit for it to come out.

Where do you stand on the issue of covered grades at Johns Hopkins University? We’re curious to hear from our readers.