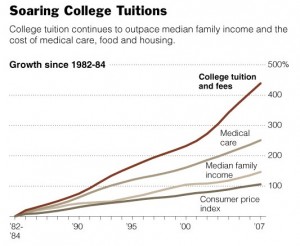 College tuition costs increased by 439% from 1982 to 2007. Meanwhile, family income increased by 147% over that same time span. Does that sound a bit ridiculous? It may, but it’s also true according to a report published a couple of years back by the National Center for Public Policy and Higher Education. So our question is — just how ridiculous is a 439% increase in college tuition costs?

Since November, UCLA has raised its university tuition costs by 17.6% and there may indeed be more tuition hikes in Westwood later this year. And they’re not alone. Read about rising Ivy League tuition costs. And read about how college tuition increases at a rate much higher than inflation.

But how does a 439% increase compare to other sectors? Well, during that same 28 year time frame, medical care costs increased by 250%. The consumer price index increased by just a bit over 100%. In fact, college tuition costs “outpace median family income and the cost of medical care, food and housing,” according to a tuition article in the “New York Times.”