There was an article entitled “Two, Three Essays? More Can Mean Less ” in “The New York Times” recently by Eric Hoover that details how Boston College combatted a growing trend at the university — an increasing number of admitted students who chose to attend other universities. With more and more students applying to more and more colleges, Boston College bravely decided to buck a college admissions trend by essentially saying without saying it, “We don’t care if we get fewer applications. We want students who want to go to BC.” Way to go, Boston College. 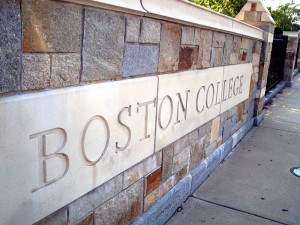 Ivy Coach salutes Boston College for bucking a college admissions trend, at the risk of the university’s “US News & World Report” ranking.

With a yield that declined from 32% to 23% between 2004 to 2011, Boston College wanted to make some changes to ensure that students who applied actually had interest in going to BC — not just to amass a feather in their caps by earning another acceptance letter. So what did BC do? They required applicants to BC to do more on their application to the university, to make sure that they really had interest in being an Eagle. If a student really wants to attend BC, after all, they’d be willing to write a little bit more in their application, right? Right. So they added another essay that was 400-words in length. As stated in the piece in “The New York Times,” the essay question read, “‘Tell us about a time you had all of the facts but missed the meaning,’ one prompt says. Another invokes St. Ignatius of Loyola, founder of the college’s Jesuit order, and invites students to reflect on their plans to ‘serve others.'”

And so what happened to the number of applications? They decreased by 26% (of course)! Require a college applicant to write an essay that is specific to a school (that can’t be used for other applications) and all those applicants who have no genuine interest in going to BC will suddenly not even bother applying. Will this hurt BC’s “US News & World Report” ranking? You bet. The number of applications matters. If fewer people apply, the acceptance rate will invariably be higher than if the applicant pool didn’t drop by 26%. But it seems that BC doesn’t care about their “US News” ranking. They want students who are BC proud. While BC’s yield rate isn’t yet in, we salute BC for bucking this college admissions trend, for bravely going where no college seems to be willing to go. Go BC!