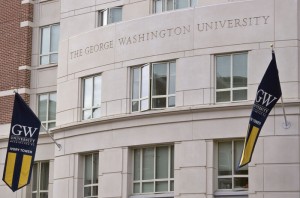 GW isn’t “need-blind” and neither is any highly selective college in America. It’s a myth perpetuated by these very institutions (photo credit: MattKingston).

We came across an interesting and well argued editorial on “Aljazeera” from a little while back written by Sarah Kendzior that we wanted to share with our loyal readers. In the editorial entitled “The Immorality of College Admissions,” Kendzior argues that while colleges preach frequently about their yearning for diversity, this diversity generally does not include students whose families cannot afford tuition. And she does indeed have a point. Think about it logically. If a school admits an entire student body whose family incomes are so low that they all need financial aid, the university would not be able to continue for too many more years. They’d have to dip into their endowment. They’d require much more money in the form of donations from alumni. It just wouldn’t be possible.

Writes Kendzior in her college admissions editorial under the subheading “Faux Diversity,” “‘Diversity’ is a cherished value of American schools – so long as that diversity does not include students whose families earn less than the tuition fee. Elite universities favour those willing to pay to play – and play again until they win. Only 3.8 percent of American families make more than $200,000 per year. But at Harvard University, 45.6 percent of incoming freshman come from families making $200,000 or more. A mere 4 percent of Harvard students come from a family in the bottom quintile of US incomes, and only 17.8 percent come from the bottom three quintiles. ‘We admit students without any regard for financial need – a policy we call ‘need-blind admission’,’ Harvard’s website proudly proclaims. Harvard charges $54,496 per year for tuition, room and board, but waives the fees for families making less than $60,000 per year.”

We’ve been saying for years that highly selective colleges — while they may profess to be “need-blind” aren’t in practice. “Need-blind admissions” is a myth, one perpetuated by just about every highly selective college. News out of George Washington University sheds light on this myth, but there is indeed much more light to be shed.