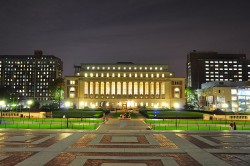 We’re not sure why we’re featuring an image of Columbia. Sometimes we have difficulty thinking of the right photos to match our content. You’ll get over it (photo credit: Andrew Chen).

Here’s an interesting story for our readers. A producer for Lifetime’s “The Balancing Act,” the network’s morning infotainment show, reached out to us inquiring about appearing on their show for a segment on college admissions. As we’re featured in the national and world press regularly (hey, we’re a company and not a college applicant so we’re allowed to brag — deal with it), we thought nothing of it. Sure, we’ll appear on this morning show we’ve never heard of. We’re not camera shy. We know…shocking.

We had a whole conversation with one of the producers of the show about the segment and we offered some of our (always) unfiltered and candid opinions about the highly selective college admissions process. All seemed fine. The producer described the show. We asked a question about the audience and the total demographic to understand the show’s reach (though we have a strong feeling our demographic doesn’t watch much Lifetime) even with its new tagline, “Your life. Your time.” “Television for Women” what? We guess Nancy Dubuc of Lifetime’s parent company wanted to rebrand. But anyhow, as the call was seemingly wrapping up, the producer added a little disclaimer. She said we would have to pay $54,000 to appear on the show. Now, at Ivy Coach, we are not shy about charging high fees (CNBC even made fun of us for charging $100,000…if only they knew we charge more than this!). But we’re a business. Of course we charge our clients. But for a show that isn’t supposed to be an infomercial but instead presents itself as a morning infotainment series to charge us $54,000 to make an appearance? It’s outlandish if you ask us.

Have any of our readers heard of Lifetime’s “The Balancing Act”? We sure haven’t.

Brian of our firm worked at “Good Morning America” under Ben Sherwood, now the Co-chair, Disney Media Networks, and President, Disney | ABC Television Group, who was then the Executive Producer of the ABC news / infotainment program (and Brian will be helping to deliver (hopefully) one of Ben’s next hits on ABC as an Executive Producer of a show based on an F. Scott Fitzgerald novella written by a Pulitzer Prize and Tony winner). So we know a little bit about television. And we know a little bit about news — and booking wars. If a show like “The Balancing Act” wants to charge businesses to appear on their airwaves, fine. But it should be revealed to the audience that these businesses are paying sizable fees to self-promote. And, as importantly, it should be revealed at the beginning of a conversation with a producer (and not at the end as a disclaimer) that it costs $54,000 to be on the program so as not to waste time. Why on earth would we pay $54,000 to be on a show we’ve never heard of when we get to be on shows we have heard of, and ones we consider reputable, for free?