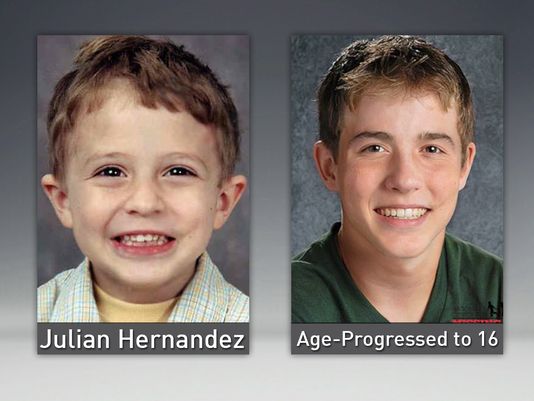 Julian Hernandez was reunited with his mother because of the college admissions process — after having been kidnapped as a toddler (photo credit: National Center for Missing and Exploited Children).

You may remember when we wrote a while back about how a college applicant’s Personal Statement revealed that she had been raped and how this essay ended up resulting in the arrest of her stepfather — nine years after the crime had been committed. Apparently the young woman’s mother read the college essay and immediately reported the crime to police. Well, we’ve got some more news to report about how college essays can drastically change lives. As in they can not only significantly help (or significantly hurt) a student’s chances for admission to dream colleges, but they can also reveal the truth about…a kidnapping!

Allow us to share with you the story of Julian Hernandez. Julian disappeared in 2002 at the age of 5, while he was living with his mother. His mother, and the authorities, have not known his whereabouts since. As reported in a piece about Julian Hernandez by Jay Reeves of “The Associated Press,” “Julian Hernandez’s mother reported him missing from the Birmingham area in 2002 after his father left her a note saying he’d taken the boy, police said. After years of dead ends, officials said, the key tip came in on Oct. 30. Hernandez was doing well in school in Ohio and was applying to several colleges, but there was an issue with his Social Security number, according to police in Vestavia Hills, near Birmingham. He approached a school counselor, who was trying to help when she realized Hernandez was listed as missing by the National Center for Missing and Exploited Children, District Attorney Brandon Falls in Jefferson County, Alabama, told local media outlets.”

So, the key takeaway here for our readers is that the college admissions process can solve kidnapping cases. It can bring justice against those who’ve committed egregious crimes (amen to that!). And, on a much lighter note, let’s not forget that we prevent murder at Ivy Coach. Indeed we do.