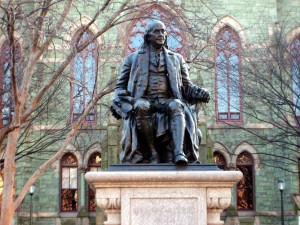 Penn values its Early Decision applicants quite a bit!

One of our favorite deans of admission, Penn’s always colorful Eric Furda, has written a great blog on things students should consider before they apply Early Decision to a school. Applying Early Decision, after all, is signing a contract that if admitted, you will attend. So read through what Dean Furda has written and be sure to read these words at least twice: “Applying Early Decision can be exciting. It is a way for you to show your commitment to a school that means a lot to you. Continue asking questions, editing, writing, and looking inward as you move forward with your Early Decision application process.” By showing a commitment to a school like Penn, they’ll be more likely to show their commitment back. Funny how life works like that. If only such was always the case with love!

Anyhow, if you’re at all curious why Penn’s admissions blog, on which Dean Furda writes, is called P.217, it’s because for nearly twenty years, Penn had a supplemental essay that read, “Please write p. 217 of your 300 page autobiography.” It was a really easy essay since you could write about essentially anything. But too many Penn applicants stressed about it and, four years ago, Penn did away with it. The assumption is that it caused too many students to not apply to Penn. And highly selective colleges like Penn always want to encourage potential students to apply. The more students who apply, the lower the admission rate will be, and the higher Penn will be ranked in “US News & World Report.” Funny how things work out so logically sometimes, right?