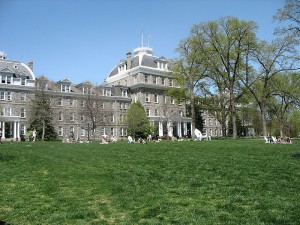 Applications to Swarthmore dropped this past admissions cycle because of the school’s supplemental essay requirements.

For regular readers of our college admissions blog, you likely guessed right. It’s that Swarthmore required students to write two supplemental essays this past admissions cycle and both supplemental essays were 500 words. Many highly selective universities require students to complete one long supplemental essay but some schools require more. Some universities require students to complete a number of essays and short answers (Stanford, Princeton, Yale, Columbia, and the University of Chicago, among so many others). But maybe Swarthmore wasn’t in position to require so much content from students. It clearly disinclined students from applying to these schools. The question is: If these students were so lazy that they didn’t want to write two 500 words essays, would they have attended Swarthmore anyhow if they earned admission? Likely not. But, nonetheless, the school’s admission rate was hurt this year because of the drop in applications and that hurts its “US News & World Report” ranking.

And no school wants to experience a drop in its “US News & World Report” ranking! For next year’s batch of applicants to Swarthmore, rest assured that they will only require one supplemental essay rather than two and it will be half as long as this year’s requirement. As reported by “Philly.com,” “At Swarthmore, the smaller applicant pool had virtually no effect on the quality of the class, Bock said. SAT scores, GPAs, and other measures of incoming freshmen remained much the same as last year, he said. ‘We remain outrageously selective,’ Bock said. The college accepted 17 percent of its 5,540 applicants this spring, compared with 14 percent of 6,614 applicants in 2013. Nonetheless, the numbers reflect a drop in selectivity, long seen as a marker of prestige. Swarthmore will move to one supplemental essay next year, Bock said, and cap it at 250 words – half this year’s maximum.”

Have a question about admission to Swarthmore? Let us know your questions by posting a Comment below. We look forward to hearing from you! And, while you’re here, check out our compiled Ivy League Statistics.