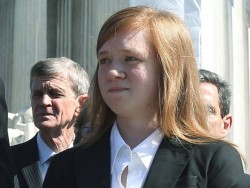 Will this crusader against Affirmative Action soon be declaring victory?

Is Affirmative Action in peril? At Ivy Coach, we don’t happen to think so. We believe the Supreme Court, which recently heard a case concerning the right of universities to consider race in the admissions process, will uphold the right of universities to use race as a factor in the holistic admissions process. But a “New York Times” piece recently published entitled “Supreme Court Justices’ Comments Don’t Bode Well for Affirmative Action” by Adam Liptak suggests that some folks aren’t as confident as we are that the practice will withstand this latest court challenge.

As Litvak writes in his piece, “An affirmative action plan at the University of Texas seemed to be in trouble at the Supreme Court on Wednesday. By the end of an unusually long and tense argument, a majority of the justices appeared unpersuaded that the plan was constitutional. A ruling against the university could imperil affirmative action at colleges and universities around the nation. In a remark that drew muted gasps in the courtroom, Justice Antonin Scalia said that minority students with inferior academic credentials may be better off at ‘a less advanced school, a slower-track school where they do well.’ ‘I don’t think it stands to reason that it’s a good thing for the University of Texas to admit as many blacks as possible,’ he added.” May this man soon be off the bench.

Will Abigail Fisher alas declare victory against the University of Texas at Austin? We don’t happen to think so.

But the important voter is not Justice Scalia. The world knows which way he’ll be voting. The important vote belongs to the man who helped bring marriage equality to America with his vote in favor of ending a history of discrimination. That man, that swing voter, is Justice Anthony Kennedy. And we have a feeling he’s going to swing the way of supporting the right of colleges to factor in race in a holistic admissions process, even if “The New York Times” doesn’t necessarily agree with us. As Litvak writes, “It remains conceivable that the court could avoid ruling on the question for a second time. Justice Anthony M. Kennedy, who almost certainly holds the crucial vote and has never voted to uphold an affirmative action plan, spent almost all of his time exploring whether the university should be allowed to submit more evidence to justify its use of race in accepting students.”

Only time will tell. How do you think American’s highest court will rule? We’re curious to hear from our readers.