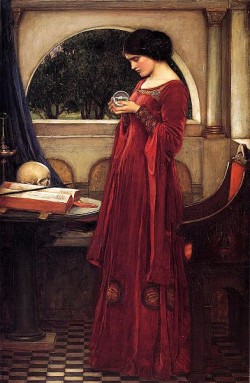 This person in the hip red dress doesn’t work at Ivy Coach but, like her, we do indeed have a crystal ball. And it’s quite accurate.

A piece in “The New York Times” by Adam Liptak entitled “Student’s Protests May Play Role in Supreme Court Case on Race in Admissions” focuses on how the protests at schools like Yale and Princeton may shape how the highest court in the land rules in this important Affirmative Action case. For those not familiar with the case of Abigail Fisher, who after all these years is basically making ending Affirmative Action her life’s cause, read more about the legal action she’s taken against the University of Texas at Austin.

Adam Liptak writes in his piece in “The New York Times” that the fact that a few justices attended Princeton and a few attended Yale Law School will impact how they rule in this particular case. We’re not so sure about that. Certainly there is racial tension on these campuses right now — with the Halloween costume incident at Yale and the Woodrow Wilson debate at Princeton. But we have a feeling our justices won’t be influenced by these incidences. We have a feeling they will render their ruling independent of the news stories happening at this particular time. That is, typically, the case with our nation’s highest court.