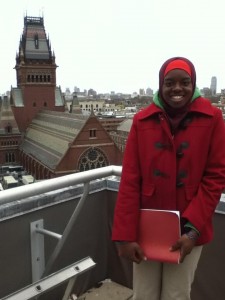 This young woman was admitted to Harvard at a very young age (photo credit: Saheela O. Ibraheem as featured in “The Crimson”).

College seniors frequently say that the freshmen look younger and younger every year. Usually, it’s just their minds playing tricks on them. But in the case of incoming Harvard freshman Saheela O. Ibraheem, they’re not wrong. Saheela will be matriculating to Harvard College next year at the age of fifteen. Like most of next year’s freshman class who gained admission to Harvard, Saheela applied as a high school senior. She just happened to skip the sixth and ninth grades!

Admission to Harvard for fifteen year-olds isn’t new. They’ve admitted younger whiz kids before. But it doesn’t make it any less intriguing! According to “The Crimson,” “Her parents—a quantitative analyst and an accountant—began teaching her advanced math at a young age. Ibraheem even scored a 700 in the mathematical reasoning section of the SAT as a fifth grader. Ibraheem said she applied to 14 schools in the fall, including seven of the eight Ivy League schools. She received acceptance letters from all of them except Yale. She made her decision to attend Harvard after visiting MIT and Harvard during their respective prefrosh weekends.”

Do you think fifteen year-olds are too young to be at college? Do you think they aren’t socially mature enough yet? Let us know your thoughts by posting below!

See “The Crimson” article on the 15-year old admitted to Harvard.

Check out this post on another Harvard Admit and sign up for a free 30-minute consultation today.