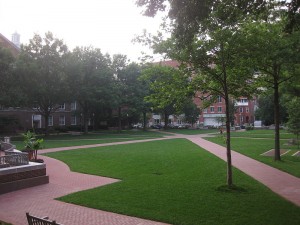 Admission to GW is not need-blind no matter what they may tell you (photo credit: Pjn1990).

According to the article on “ABC News,” “George Washington University faced backlash from students and alumni this week as the campus newspaper reported that applicants had been led to believe admissions at the private institution were need-blind. Administration officials acknowledged that some students who had asked for financial aid were put on wait lists merely because they could not afford the total cost of $61,918 to attend the private school.” This, of course, is common practice at a number of colleges throughout the country — including highly selective colleges — but few schools are ever called on the dishonest practice. We call them on it all the time. But it’s nice to have some backup from “ABC News” and “The GW Hatchet.”

Apparently, as recently as five days ago, students at George Washington University were told at a campus info session by GW admissions officers that GW pays no attention to financial need when making admissions decisions. Uh huh. We’ve had folks who’ve worked at GW admissions on our staff and, behind closed doors, they’d tell you that this is — quite simply — not true.