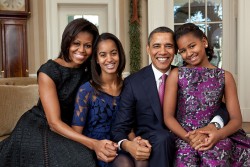 Malia Obama is, without question, the most highly sought after college applicant of the year. Which college will land her?

We’ve written before about Malia Obama, the elder of the Obama daughters, and how universities will be clamoring for a chance to land this high school senior on their campuses this fall. But now that college list of America’s first daughter is starting to really take shape, just as it is for many high school seniors across the nation. Indeed a piece in “The New York Times” today by Nicholas Fandos entitled “Malia Obama’s College Pick: Ivies, Liberal Arts or Public University?” points out that Malia seems to be focusing her attention on Stanford University, Columbia University, Brown University, Yale University, Harvard University, Princeton University, New York University, Tufts University, Barnard College, and Wesleyan University. Tufts, NYU, Barnard, and Wesleyan must be pretty excited to be among the possible contenders. But we suspect Malia will not end up a Jumbo. And while she may end up a Cardinal, it would likely be a Stanford Cardinal — not a Wesleyan Cardinal. Sorry Tufts and Wesleyan…we usually give you lots of love.

And so how has Malia been visiting these colleges? Not with her mom and dad. As Fandos writes, “At Columbia, the president’s alma mater, Malia was shown around by Zila Reyes Acosta-Grimes, a third-year law school student serving on the university senate whose father is a prominent New York jurist. At Yale, the college’s head student tour guide, Jeremy Hutton — once a competitor in the Mr. Yale beauty pageant — showed off the Gothic campus. At Harvard, Malia toured the Yard with Taylor Nides, a fellow senior from Sidwell and the daughter of Thomas R. Nides, a former deputy secretary of state under Mrs. Clinton, and Virginia Moseley, the deputy Washington bureau chief at CNN.” So, as we’ve said all along, don’t expect to see Malia Obama on your college tour this fall.

It seems that Malia has an interest in working in film and television. She worked as a production assistant on the CBS series “Extant” as well as on the HBO series “Girls.” We’re glad that Malia isn’t only considering universities with great film programs (like USC, NYU, and UCLA). As you may know from reading our college admissions blog over the years, we believe that attending a film school can be an unwise choice indeed, even if you do want to be a director, writer, or producer.

Where do you think Malia will end up? Let us know by posting your guess as a Comment below. Which school will win the Malia Obama sweepstakes? And make no mistake —  every college in America hopes she’ll choose them. To quote a famous line from “Grey’s Anatomy” by Dartmouth alumna Shonda Rhimes, “Pick me, choose me, love me.” That’s what these colleges are thinking. And maybe, just maybe, the underdog (Wesleyan, Tufts) will have its day? Likely not. But maybe?