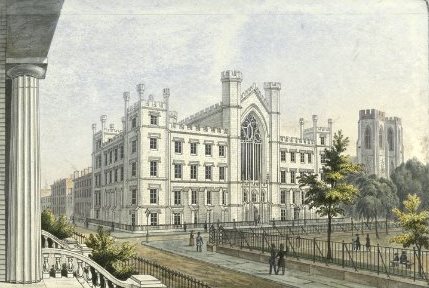 NYU is setting up shop in Shanghai.

The statement reads, “For NYU, the creation of NYU Shanghai is another major step in the evolution of NYU as the first global network university — standing with NYU New York and NYU Abu Dhabi as a degree-granting portal campus. The global network provides a new architecture for the University, an organic integrated system permitting faculty and students to move easily from within the system to pursue their scholarly interests. In this regard, the architecture of the University incarnates in the free flow of its community the free flow of ideas that has long characterized the academic disciplines and the advancement of thought.

In addition to the three portal campuses, the network includes a dozen other global academic sites on six continents, including new sites under development in Washington, DC, and Sydney, Australia. NYU’s global network was recently recognized with the Sen. Paul Simon Award for Campus Internationalization by NAFSA: Association of International Educators. A full explanation of the global network university idea that can be found online by clicking here.

For China, the creation of NYU Shanghai is a major step in the country’s higher education reform. It expresses a commitment to incorporate internationally accepted standards of university design and administration into China’s efforts to expand access to higher education pursuant to its National Long-term Educational Reform and Development Program.”

The first class of incoming students to NYU Shanghai will enter in September 2013. Half of  the matriculants are expected to come from China while the other half are expected to come from around the world, making it truly a global university. When the university is fully formed, it is expected that it will enroll 3,000 undergraduate and graduate students. The education will be similar to that offered at NYU’s Manhattan campus — one grounded in the liberal arts that requires students to take courses in the humanities, natural sciences, and social sciences before they begin their concentration in any particular discipline.

Check out the NYU press release on NYU Shanghai here. Here is a full explanation of a global network university.

And check out our posts on university admission in China or our admissions seminars in China.