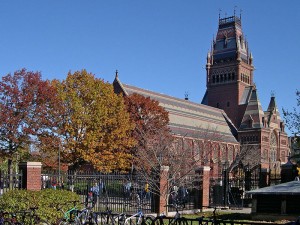 A recommendation from a professor who is a great American author should always carry enormous weight. This story is the exception to the rule, not the rule (photo credit: Jacob Rus, 2004).

Professor recommendations to grad school should matter. They usually do quite a bit! A celebrated American writer, one whose seminal work is required reading in classrooms across this country, recently recounted to us a story that we would like to share with the readers of our admissions blog. This American writer happens to also be a professor at a prestigious American university and has been for several years now. We asked him about his class and he mentioned that he takes any student in his class regardless of their writing ability. So over the years, he’s presumably taught a number of poor writers and made them stronger writers with his guidance.

We asked him if there was ever a student that stood out because of his or her writing abilities. Sure enough, there was. In the writer’s first year of teaching, he had a student whose writing was so exceptional that he still remembers what he wrote about all of these years later. Apparently, the student could write about something as mundane as a pen and the writing would be magnificently detailed and riveting. Our friend the novelist then brought up the fact that he had written a letter of recommendation on the student’s behalf for a writing graduate program at an Ivy League university. The student was denied admission.

Shame on that Ivy League school for not admitting this student! A great American author — one of our nation’s finest — said that his writing was remarkable. All of these years later, he still regards the student as the best writer he’s ever taught. When a great American writer tells you that someone is a gifted writer, take them at their word! We don’t care what the student’s grades and test scores were like. He was applying for a graduate writing program and he had the strongest of endoresements from someone who dominates “The New York Times” Bestseller List. Sometimes, admissions offices get it wrong. But — more often — they get it right. We just thought we’d draw your attention to a story in which they seem to have gotten it dead wrong.