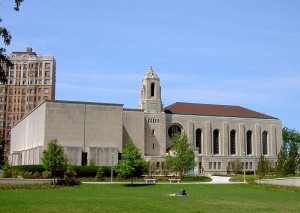 The Assistant Dean of the Loyola University Chicago School of Law likely didn’t expect her email to this applicant to hit the Internet. It did and we happened to see it (photo credit: Amerique).

As you may know from reading our blog — the most visited blog on the topic of college and graduate school admissions — we take great pride in correcting misconceptions about the admissions process and in pointing out injustices. On this note, we wanted to bring to your attention an exchange between an applicant to the Loyola University Chicago School of Law with Assistant Dean Pamela A. Blomquist. In short, Dean Blomquist got served!

Here is the initial email from the applicant to Dean Blomquist:

Dear Dean Yellen and Members of the Admissions Committee:

My name is David Valk and I intended to apply to Loyola University Chicago School of Law for the Class of 2017.

I learned this morning that Loyola Chicago discriminates against gay and lesbian couples and will not perform same-sex marriages on-campus.

My goal is to attend a law school that will help me grow as a public servant and provide me an education grounded in the advancement of social justice. Your university’s policies do not reflect these values.

I have deleted my application from Law School Admission Council and will encourage my peers to do the same.

In response, Dean Blomquist wrote (click on the image to zoom in):

To which the applicant who rescinded his application to the law school wrote:

RE: Re: Application Rescinded

Loyola Chicago’s policy to not allow marriage ceremonies on-campus for gay and lesbian couples perpetuates the misguided idea that being gay is wrong. While I am happy the law school enjoys an open and active LGBTQ community, targeted gender-based crimes against LGBTQ people – especially against people of color – continue to rise in Chicago.

Just this summer, another hate-based crime took place in your neighborhood, as reported by the Chicago Tribune.

“The women were beaten Saturday, clutching each other as they were pinned against a car by about 10 men who taunted them for being gay and took turns punching and kicking them on the dark street, one of the victims said.”

Most alarmingly, “A study by the National Coalition of Anti-Violence Programs found 2,016 reports of violence in 2012 against LGBT people and people affected by HIV. The report also found that LGBT people of minority races are nearly twice as likely to be victims of violence as their white counterparts.”

My decision to attend law school is not a lofty one; I intend to make a life-long commitment to the campus and community I will be part of. However, I cannot, in good conscience, support an institution, academically or financially, that actively promotes policies that denigrate and malign my most basic dignity.

As I send this to you, I have been contacted by four other law school applicants who have committed to pulling their applications this year because of your policy. There is a real cost to discrimination. I urge you to work with OUTLaw and your administration to change this policy today.

Like you, I was heartened by the words of Pope Francis. “If someone is gay and he searches for the Lord and has good will, who am I to judge?”