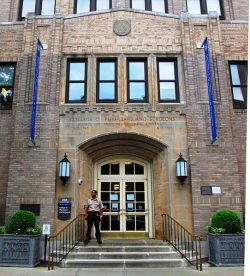 The head of Columbia’s medical school admissions committee has resigned (photo credit: Beyond My Ken).

As Karen Xia reports for “The Columbia Spectator” in a piece entitled “Columbia medical school admissions dean resigns, citing ‘unwarranted and unjust’ actions by administration,” “College of Physicians and Surgeons Dean of Admissions Stephen Nicholas abruptly resigned Friday over a dispute with Dean of the Faculty of Medicine Lee Goldman regarding ‘unwarranted and unjust’ decisions about the college’s admissions committee, according to an email he sent to medical students earlier this afternoon. According to Nicholas, a member of the admissions committee since 2001, Goldman threatened to dismiss him if he did not remove a member of the committee, an order which Nicholas said jeopardized the ‘autonomy and integrity’ of the body. Nicholas did not clarify the reason behind Goldman’s request. Neither Nicholas nor a Columbia University Medical Center spokesperson immediately responded to requests for comment.”

Xia’s reporting continues, “In an email to students later in the afternoon, Ronald Drusin, vice dean for education at CUMC, countered Nicholas’s allegations, stating that the former admissions dean had been given improper control over the admissions committee’s membership. Drusin said senior administrators have now realized that practice was not consistent with CUMC’s bylaws and that, going forward, the executive committee of the school’s Faculty Council is responsible for approving changes to the membership of committee, while official appointments are to be made by trustees. In light of Nicholas’s departure, Anne Armstrong-Coben, assistant professor of pediatrics at CUMC, will serve as interim associate dean for admissions, effective immediately.”

It sure seems to us that the former dean of admissions at Columbia’s medical school, Stephen Nicholas, created a whole lot of drama all because he didn’t want someone taken off the admissions committee by his superior. Heck, it’s not like Columbia’s dean of the faculty of medicine was asking Chief Justice John Roberts for the removal of an Associate Justice from our nation’s highest court! Stephen “Johnny Drama” Nicholas makes it seem like world order would collapse if this dean of the faculty of medicine got his way.