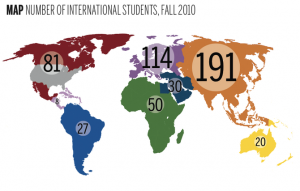 According to this map from the “Yale Daily News,” the majority of international students at Yale come from Asia. Shocker.

As per the article, “Even countries that used to have the reputation for not being interested in studying abroad have really opened up recently,” said Jean Lee, co-director of international admissions. “It shifts and changes. Culturally the idea of staying home is stronger in some countries than others.” “Lee said international students often do not want to apply to Yale, or any college in the United States, because in their home countries, students have to begin career training at the undergraduate level in order to become a professional. Because the idea of a liberal arts education is unfamiliar, diverging from traditional paths can seem daunting to these students, she added.”

We’ll have to wait and see how these numbers are impacted by Yale’s incoming Class of 2015.