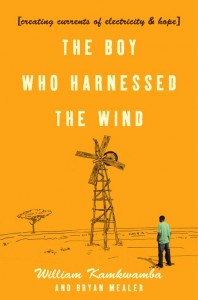 A remarkable Dartmouth College freshman co-authored The Boy Who Harnessed The Wind.

Dartmouth College is very proud to have as a member of its Class of 2014 an inspirational young man who has changed the world. This young man, William Kamkwamba, is the subject of The New York Times bestselling 2009 work of nonfiction by Bryan Mealer, The Boy Who Harnessed the Wind: Creating Currents of Electricity and Hope. Kamkwamba, a native of Malawi in southeast Africa, gained celebrity in 2002 when he constructed a windmill in his native country made up of bicycle parts, shoes, materials from the scrapyard, and blue gum trees to provide power to kitchen appliances in his home. Kamkwama has since built other windmills and a water pump that is solar-powered and provides clean drinking water to his neighbors.

Kamkwamba, who couldn’t afford tuition to continue his formal schooling, received the remarkable honor of presenting at a prestigious TED Conference (Bill Gates, Steve Jobs, and Malcolm Gladwell are among the long list of other TED presenters) where venture capitalists offered to pay for his schooling in the United States. He chose to attend Dartmouth College in Hanover, New Hampshire. And it should be little surprise that in speeches to Dartmouth College alumni groups throughout the country, Dartmouth President Jim Yong Kim is now sharing the inspirational story of William Kamkwamba.

College admissions offices are always looking for students like William and the fact that the Dartmouth College admissions office managed to secure William’s matriculation demonstrates a great victory for the College on the Hill. This is a young man who any college in America — from Harvard University on down — would covet. He is, one could make the case, potentially even the greatest college applicant ever. The guy co-wrote a #1 New York Times bestseller, built a windmill to power his village, and gave a TED Talk on the subject? Who wouldn’t want this young man at their university?