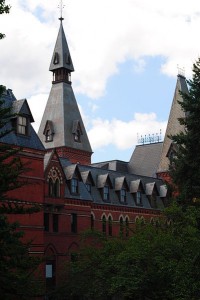 Do men have an easier time in the college admissions process than women? According to one study, the answer is yes (photo credit: Eustress).

College admissions statistics don’t typically include this number. Men get admitted at a 13% higher rate…according to a 2007 “US News & World Report” study. According to a “Philadelphia Inquirer” piece entitled “Affirmative Action Isn’t for White Guys,”At some institutions, men get an even bigger boost than that. The College of William and Mary, for example, admitted 45 percent of its male applicants last year and only 27 percent of the females.”

So is it more difficult for women to gain admission to highly competitive universities than for men and do college admissions statistics reflect this fact? The “Philadelphia Inquirer” piece goes on, “Why? Put simply, women are outpacing men at every stage of American education. They already make up 57 percent of undergraduates and 59 percent of graduate students. Unless colleges make ‘accommodations’ for male applicants, the argument goes, many institutions would end up with student bodies that are 70 or 80 percent female. And the colleges don’t want that. Surveys have shown that both female and male students prefer gender balance. So if a university gets too ‘girlie,’ as the students like to say, the strongest applicants look elsewhere.”

Do these college admissions statistics seem plausible to you? At your child’s high school, do female students do better academically than their male counterparts? Is this a trend you notice? Let us know your thoughts on this controversial alleged trend in college admissions!