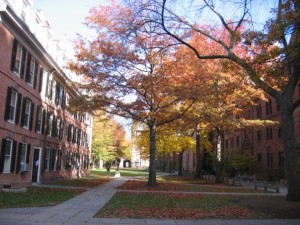 Founded in 1701, Yale College, with some of the most beautiful architecture in the world ranging from Gothic to Georgian to Colonial to Modern, has one gorgeous campus — and the Yale University Admissions department maintains its standing as one of the most selective universities in the nation. There are approximately 5,300 undergraduates and another 6,000 graduate students at Yale.

With good town-gown relations, the town of New Haven, Connecticut (the self-proclaimed pizza capital of the world) has undergone some major renovations in the past decade. There are an abundance of fine restaurants, theatrical, musical and dance performances, food festivals, and street fairs. New Haven even has its own Little Italy. Equidistant to Boston and New York City (about 1.5 hours in either direction), Yale makes for an exciting weekend getaway.

Yale University is known, among other things, for its Residential Colleges.

Yale doesn’t have a core curriculum, but students must take three courses in four different academic areas including language and literature, social sciences, arts and humanities, and mathematics. With over sixty-five departments and programs to choose from, Yale boasts offering more than 2,000 undergraduate courses in disciplines such as computer sciences, engineering, humanities, mathematical, natural sciences, and social sciences. The shopping period during the first two weeks of classes allows students to sit in on classes and test them out before officially enrolling.

In the evenings, the dining halls convert to orchestra, band, or a cappella jam sessions, political debates, theatrical performances, or quiet poetry readings. The master and dean of each residential college are professors who live in that college, dine with students, and serve as advisors. Each college has its own Master’s Teas where invited guests are prominent figures from politics, academia, journalism, visual or performing arts, or from the business world. If you happen to be absent from class because of illness or a particular situation and need an extension on an assignment you get a note not from mommy or daddy but from your dean.

The overall Yale University admissions rate stood at 5.9% for the Class of 2023. A total of 36,843 students applied in both the Early Action and Regular Decision rounds. Yale University Admissions accepted 2,178 students for a targeted freshman class of 1,782 students.