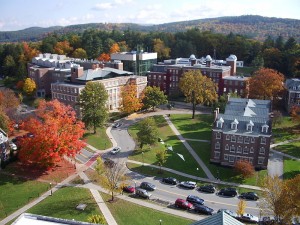 Admission to Dartmouth stood at 7.9% overall for the Class of 2023.

Dartmouth College, also known as “The College on the Hill” was founded by a Puritan minister, Eleazar Wheelock, in 1769. One of the eight member institutions of the Ivy League, Dartmouth is the smallest school in the Ancient Eight. As Secretary of State and Dartmouth alumnus Daniel Webster famously once said in the landmark Dartmouth College v. Woodward case, “It is, Sir, as I have said, a small college. And yet there are those who love it!” And love it they do. As do prospective students…even if the Dartmouth College admissions numbers are getting lower and lower.

As a student applying for admission to Dartmouth, you would be hard-pressed to find a college with a more loyal and passionate alumni base. You would be hard-pressed to find a college where so many alumni give back to their college and forge lifelong friendships with their classmates. Why’s that? Because for four years, students are in the middle of nowhere – in tiny yet picturesque Hanover, New Hampshire – where there is very little to do. There is the Hopkins Center to see a play or a band. There’s Occum Pond to do some ice skating. There’s Thompson Arena to check out Dartmouth’s always powerful hockey teams. There are fraternities. There are secret societies. There’s The Green to do some reading on a perfect New England spring day. Being as Dartmouth isn’t in a thriving metropolis, students get close with each other (especially in light of the freezing temperatures and major snowfalls). And these friendships prove quite special.

Snowball fights on The Green. Running around the bonfire as a freshman hundreds of times with the college community circled around you. The school’s famous Winter Carnivals that once attracted the likes of F. Scott Fitzgerald. Green Key Weekend. Hikes up Mount Moosilauke. These are some of Dartmouth’s favorite things. It is a school rich in tradition and it offers one of the finest — if not the finest — education in the world. In 2005, Dartmouth College was named by consulting firm Booz Allen Hamilton to be one of the ten most enduring institutions of the 20th and 21st centuries. According to the report, “‘Since its inception, Dartmouth has set an example for many universities and colleges in America’ and that the College ‘has been judicious in its planning during the late 20th century.'”

Dartmouth students are, in a word, happy. They love their College on the Hill. They love learning foreign languages with the Rassias Method — even if it involves waking up for early morning drill sessions. They love studying abroad on LSA’s and FSP’s. They love rubbing the nose of the statue of Warner Bentley in the Hopkins Center (it was even featured on ABC’s “Grey’s Anatomy” which was created by Dartmouth alumna Shonda Rhimes).

They love their DOC Trips which they take before orientation freshman year (days in the wilderness kayaking, canoeing, or hiking, etc. with new classmates to get to know one another). They love the outdoors — even if this means wearing a big, fluffy jacket throughout much of the year. They love the departments of economics, psychological and brain sciences, government, and history. They love Dr. Seuss and Robert Frost (both attended Dartmouth). And they love the many nationally ranked Big Green Division I athletic teams. Heck, they even have their own ski slopes.

For the Class of 2023, admission to Dartmouth decreased from the previous year with the overall acceptance rate of 7.9%. In the Regular Decision round 6.1% of students were admitted, while in the Early Decision round 23.2% of applicants got the nod. 21,176 students applied via Regular Decision to Dartmouth, while 2,474 additional students applied via Early Decision. This most enduring institution that boasts the latest two Secretaries of the Treasury, the inventor of BASIC, the CEO of GE, and is even the fictitious alma mater of Stephen Colbert, is one of America’s finest. And we anticipate the Dartmouth College admissions numbers to be even lower next year.